We performed a study about web tracking. 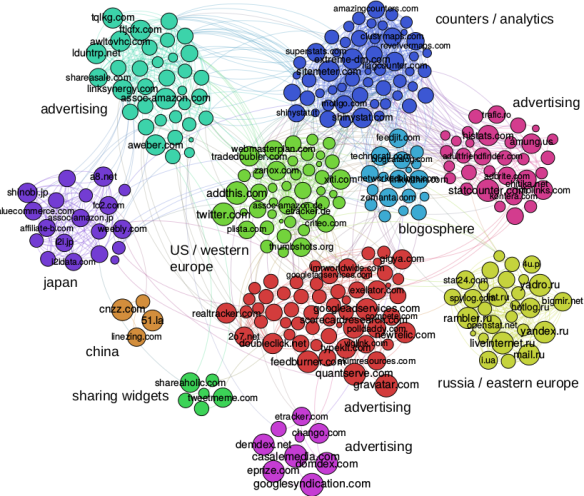 Web tracking refers to the very widespread practice of websites embedding so-called web trackers on their pages.  These have various purposes, such as optimizing the loading of images, or embedding additional services on a site.  The best known examples are the “Facebook buttons” and “Twitter buttons” found on many sites, but the most widespread ones are by far those from Google, which in fact operates a multitude of such “tracking services”.  There are however many more – what they all have in common is that they allow the company that runs them to track precisely which sites have been visited by each user.

Web trackers have been well-know for quite a time, but until now no web-scale study had been performed to measure their extent.  Thus, we performed a study about them. We analysed 200 terabytes of data on 3.5 billion web pages.

The key insights are:

Not all trackers have the explicit purpose of tracking people: Many types of systems perform useful services in which tracking is a side effect.  Examples are caching images, optimizing load times, enhancing the usability of a site, etc. For many of these systems, webmasters may not be aware that they allow tracking.

Note:  The study was performed using data from 2012 by the Common Crawl project.  Due to the fact that their crawling strategy has changed since then, newer data in fact represents a smaller fraction of the whole web.

The study was performed by my colleague Sebastian Schelter from the Database Systems and Information Management Group of the Technical University of Berlin, and myself.

The article is published in the Journal of Web Science, and is available as open access:

The full dataset is available online on Sebastian’s website, and also via the KONECT project.

2 thoughts on “Google Is the Largest ‘Web Tracker’, but by Far Not the Only One”